The recent kerfuffle about a nuclear power station brought this trip, from 2013, to mind. It’s just south of it. The area marked as “Settlement” in the ordnance survey map is an ancient town. (Likely pre-Saxon and pre-Roman) This small village, not far from Bristol, has a long history, even by English standards.

It’s a nice walk, there’s a pub in the village (which we didn’t sample, unfortunately). 2013 was hot, much hotter and drier than 2016, so there weren’t as many nice pictures to take. Brown grass on a earthwork, even an ancient earthwork, is brown grass. Simply not photogenic.

The shade by Saint Arilda’s Church was a welcome relief from the hot sun. The church, itself, is on a hill just to the south of the village. It’s something of a conundrum why there isn’t a castle ruin, because it’s an obvious place to put a defensive structure. The church community, in typical English fashion, was having a sale of used books, CD’s and nicknacks. It sat on the side of the road, and was on the honour system. I picked up a CD of bagpipe music to play in the car when the bairns misbehave. 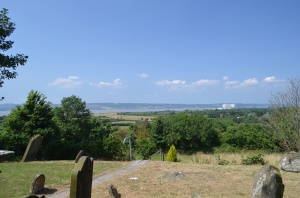 The view from the church toward the nuclear power plant. 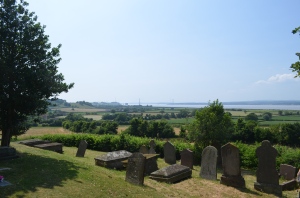 The Severn bridge is in the distance.