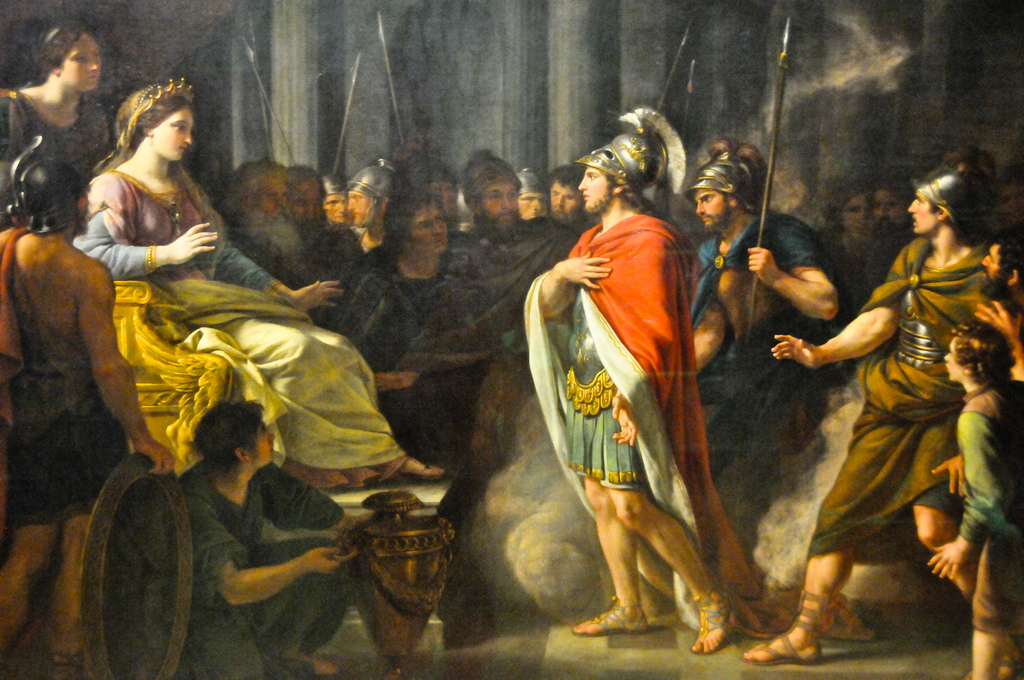 Rachel stood in the diminishing pile of books, like Dido in the remains of a literary Carthage, when a carriage pulled up outside of the Hall late in the afternoon. While the maids and footmen had repaired much of the damage, the chaos of the morning was still evident when two stylish women strode into the library, leaving their servants to handle the mundane details. The elder of the two, a ferocious looking woman in her middle years, snapped her fingers, said, “Tea,” before she dusted off a chair, and sat down, rigid in her disapproval. The other, an elegantly dressed young woman who was close to Rachel’s age, added, “What are you waiting for? Tea. It was a tedious journey and we are in need of refreshment.”

Seeing that the bell pull was still torn from its wire and feeling the desperate need for a change of scene Rachel left them and found Mrs Hobbes. “If it wouldn’t be too much trouble, Mrs Hobbes, our visitors would like tea … in the library. Are there still three cups intact?”

Despite the carnage that lay around them, Mrs Hobbes retained her humour. She smiled when she said, “Not from the best set, Ma’am, but they’ll do for this company.”

“Thank you.” Rachel returned to the library and continued restoring books to their shelves. She picked up the first of several bound notebooks. They were in Rupert’s hand, his laboratory notes; copied gracefully and clearly so that his experiments could be repeated. While she studied them, wondering what he meant by Sal. Nat. or Cinnabar and nitric spirits or for that matter what it meant to reflux, Mrs Hobbes came in with the tea tray. She put it on a table; then quietly bowed to the two women. “Ma’am,” she said to Rachel, “your tea.”

Rachel sat across from the two women and poured the tea. “I’ll be mother.”

The older one, her brown hair showing the beginnings of grey streaks, and wearing the minimal bonnet of a dowager on the make, raised her eyebrows when she said, “A servant, drinking tea with her betters. Rupert must learn to enforce proper deference in his people.”

The other one, much prettier and younger, with blonde hair, an elegant necklace, and a fine lace collar above her muslins added, “Lady Bedlington, I’m sure she could use the refreshment. We must excuse excesses when there has clearly been a cataclysm of no small magnitude. Whatever happened here?”

Rachel inspected them, “Lady Bedlington? George’s mother … and you must be Miss Deacon. I’m Lady Hayforth. I’m so pleased to meet you. We’re soon to be related.”

“I suppose, well with the short time, and … this upset. Rupert hasn’t had time to compose a letter. But”

“Oh My Lord, you’re not engaged to my grandson?”

“We haven’t negotiated the settlements yet, but yes. Rupert offered me his hand, and I accepted the honour … with great pleasure. It’s made both of us so happy.”

Lady Bedlington put her face in her hands. A minute later, when she finally had composed herself, she raised it to confront Rachel and say. “Where is my foolish grandson?”

“And my fiancé for that matter?”

“I wish I could tell you. General Byng’s men searched the Hall this morning. They took Lord Hartshorne away and George followed them to see what he could do.”

“I wish you would not be so familiar with my fiancé Ma’am.”

“I apologize, Miss Deacon, but he asked me to call him that … as a friend.”

“As a friend? Most unsuitable. I shall have to remind my dearest to keep his distance. It’s a besetting sin of his.”

“I’d say it’s charming. May I ask why you’re here? We were hoping to travel to London soon. My cousin, Lord Bromley, expects me.”

“George, I mean Lord Bedlington didn’t say anything about you or you and Lord Hartshorne in his last letter. I can see why.”

“Miss Deacon … as much as I count your fiancé as a friend, he is simply that, a friend.” Only a friend, yes, only a friend. “If you’re concerned, my companion, Miss Holloway can reassure you on that point.”

“You have a companion? Here.”

“Of course. I was on my way to stay with my cousin, for the season, when my carriage broke. Lord Hartshorne graciously,” Not so graciously at first, “offered us shelter.”

“That wretched pile, on the main road, was that your carriage?”

“Unfortunately, yes. I think our plan is to take Lord Hartshorne’s carriage. At least I hope it is, because his is incomparably better than mine ever was.” Rachel smiled at the thought.

“Dirty dishes!” Lady Bedlington leaned forward and exploded, “You baggage, you adventuress. Attaching yourself to my grandson. I’ll see that you don’t wed him.”

Rachel bit her tongue to avoid rising to the argument. Instead of giving Lady Bedlington a piece of her mind, she rose, stiffly, and after nodding to her said, “I must see to these books, Ma’am. These,” she pointed at the bound notebooks, “are his laboratory notes. I’m sure he’s most worried about them, and one seems to be missing.”

In this Gilray Cartoon, Pitt the younger is distilling Royal favour and gold to further his dreams of power. Aqua Regia – the water of kings – is a mixture of hydrochloric and nitric acids which has the happy property of dissolving gold. I’m not sure what the issue was about the barracks he’s sitting on, but there was certainly some scandal or another. 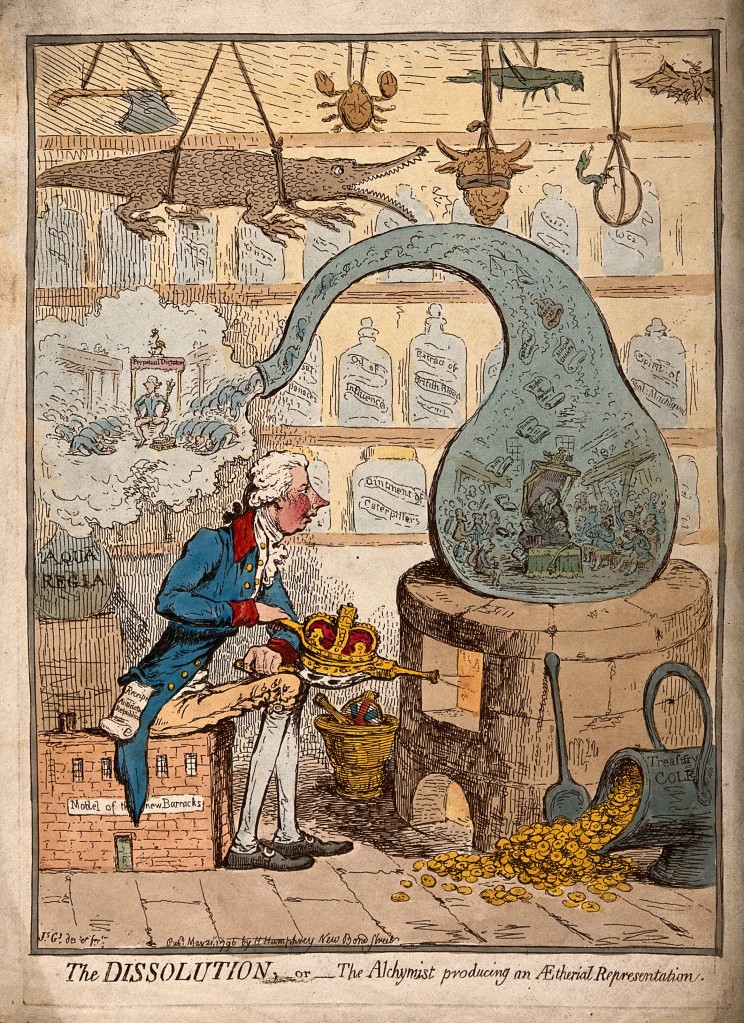 One of the big differences between Alchemy – prescientific chemistry – and chemistry is that scientists keep records that others can use to reproduce their work. Rupert’s missing notebook might be important.