Rupert showed he has something that connects his shoulders to his hips. Last week, the start of a new chapter shows that another of his talents is important.  We discovered why it was so important that Rupert come with Sir Roger recently. Rachel awoke below decks in a ship (a channel barge). Despite the sterling reputation of the English as cooks, the crew ask Rachel to cook for them. Her choice of seasonings has their desired effect. This week she gives thanks for her deliverance.

Rachel stirred in bed, woken by the ringing of the none too distant church bells. She sat up, blinked, and fought back the panicked feeling that she was in a strange room. The late afternoon sun flooded in and filled the room with an amber light. She wasn’t in that boat, this was a room. Not her room, but a nice one nonetheless.

A maid, one she didn’t recognize, asked her, “Ma’am, it’s compline. If you hurry, you could still make the prayers.”

“Dr Fowler would appreciate it, and Ma’am.”

“Yes Ma’am. Miss Fowler left a dress for you. Your old one being torn and muddy.”

The bell had finished tolling and the congregation was halfway through the first hymn when Rachel tried to slip unnoticed into the back of St. Mary’s. Even though the singing continued, it felt to her as if everyone in the room turned to stare. I can’t run. Rachel curtsied, and then found a seat in a pew in the back.

The vicar, who Rachel could almost recognize from the night before, addressed the congregation, “Let us confess our sins to God.”

As everyone started to recite, “Almighty God, our heavenly Father.” Rachel thought, I must have been exhausted to sleep this late.

“Forgive us our sins,” the prayer continued, “In what I have done,” What I had to do, “and what I failed to do.” They may have survived. Hope not.

“Forgive us, O Lord.” Should I ask forgiveness for hoping they didn’t?

The ceremony proceeded, and when it came time to read a verse or psalm, Dr Fowler cleared his voice; then said, “In light of our visitor’s harrowing experience, I thought a different psalm might be appropriate. Psalm 23. The Lord is my shepherd, I shall not want. He maketh me.”

Now everyone really did turn and look at her. The shuffling noise drowned Dr Fowler’s voice. Rachel smiled back, weakly.

I’m walking.  As my ankle recovers I’m discovering the muscles that haven’t been used as much in the last few months. I’d been warned about back pain and did a fair number of leg lifts. That worked, but the long muscles that connect the thigh to the big toe are letting me know they don’t like the situation. Fortunately stretching makes a big difference. I moved from my Philmont boots to a pair of trail runners, the same type as I used in Wales last summer.  It hasn’t stopped me from field research this summer.

Bits of folk religion show up in the oddest places.  This little statue, at the Devil’s pulpit above Tintern Abbey on Offa’s dyke, seems to represent some forest spirit or old goddess. There’s a large pile of offerings on the stump beside her. 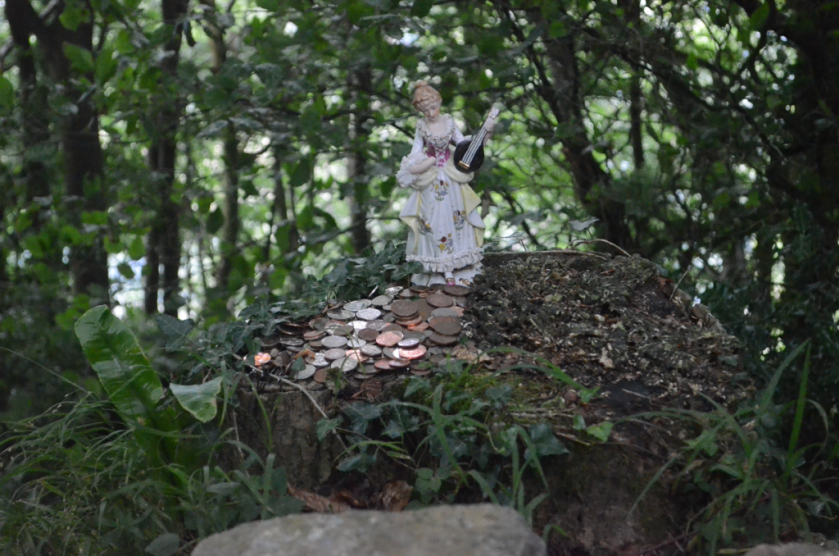 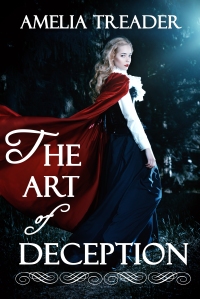 12 thoughts on “Sunday Snippet, Let us give thanks.”