From Amelia:
More field research. Aarhus is hosting a summer school in crystallography and I tagged along as an ex-crystallographer. It was refreshing, especially compared to my dear university. GSU is in the first circle of hell for academics. (probably even lower than that -R).

A scene in volume 3 of our regency spies will occur in this city.

Aarhus itself is a fairly modern city, with nominally friendly Danes. Most of them speak English because my Danish is non-extant. Danish itself is interesting, because the roots or the words are clearly evident when written, and almost impossible to hear when the Danes speak. A large part of English comes from old Norse, with the word endings, conjugations, and declensions stripped away.

One difference between Danish and English buildings is the use of pastel colours.

Right now they’re having a big beer, festival. Danish popular music is an acquired taste. You haven’t lived until you’ve heard “smoke gets in your eyes” in Danish. The (white) singer had Louis Armstrong’s gravelly voice down pat. We left when he started in on “It’s a beautiful world.” Danish rap is best left to the imagination.

The featured image shows the aftermath of an M32 sailing race in the harbour. The water on this part of the Baltic is flat. I suspect that’s not always the case, but right now I could use a sail canoe on it without problems.

She’s sent me a few more: 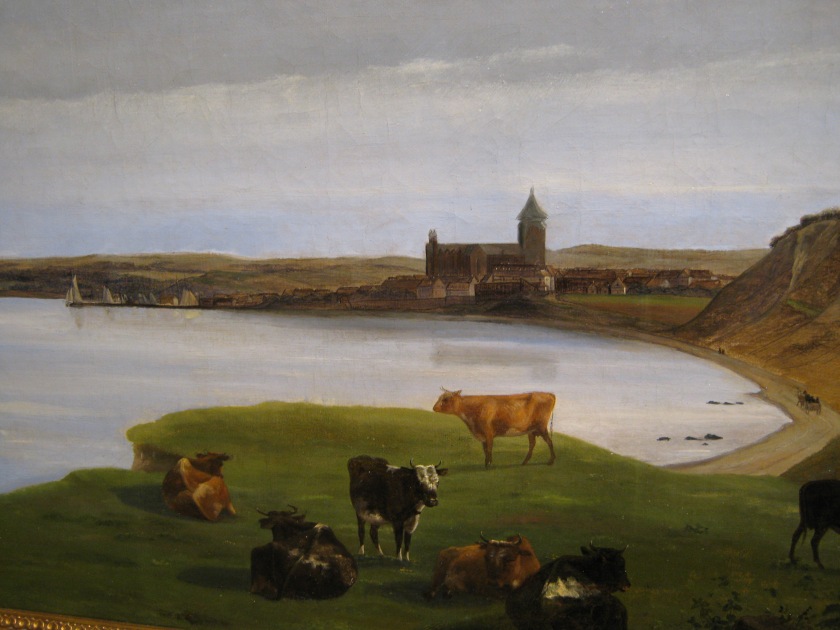 This shows Aarhus in 1850 – not too long after the period of the book we’re writing. The church is still there, but apparently it’s all built up since then.

Another from that boat race. Oh, and she likes the beer.