We decided to try exploring the West coast for a number of reasons. The most pressing being to see how the trees I planted while working for the city of Salinas were doing. Well, not really, but it’s been a while and, quite frankly, we wanted to see somewhere we haven’t been recently.

We started off by flying into San Jose, which is a smaller airport than SFO, but has the advantage of being much easier to get away from. We booked a couple of nights in Antioch – near the end of the BART yellow line with plans of exploring the city. (FYI we stayed at America’s Best Value Inns there which is cheap, clean, and decent.  Hazel’s drive in, just down the road, is a fantastic little restaurant if you’re in the area (bring cash – they don’t take credit cards).) If you do this, it turns out there’s no parking to speak of at the Antioch station. Drive to Pittsburg Bay Center and park there. (You also avoid a transfer).

We explored Chinatown and had excellent dim sum at the Imperial Inn before walking to Telegraph Hill (the Coit Tower then pier 51).  The trick to finding good dim sum is to look at the clientele. If they’re mostly Chinese, you’ve found the right place. We picked up salted plums and various Chinese candies that aren’t easy to find in Atlanta. If you walk a few streets West of the tourist area, you can find the Chinese grocery shops. There English is a scarce commodity, but the vegetables and fruits are authentic.  There’s also a tension between the mainland and Taiwanese Chinese. Several of the buildings pointedly had either the PRC or Taiwan flag displayed.

The natives posed for a practice shot with my mirror lens. It’s OK, but the resolution isn’t up to my normal standards. 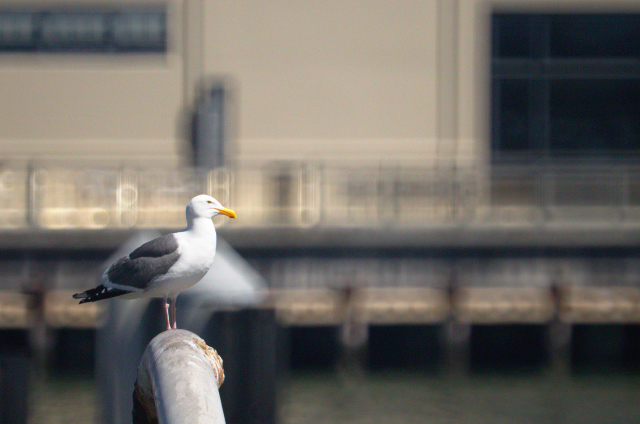 The ferry ride costs about $6.50 each way (use a clipper card, and keep track of your balance). It’s the cheapest way. There’s a bike over the bridge and return on the ferry route that looks fun, but you have to be prepared for it. (We weren’t.) Sausalito is a bit of a tourist trap, so we walked around and admired the yachts. Most of the yachts weren’t being used, and some could be had quite cheaply – if you don’t count the work you’ll need to put in to make her seaworthy.

The yachts are entrancing, but I’d need a lot of practice to move up from a sailing canoe to one of these.

For what it’s worth, I’m selling photos at Shutterstock and Alamy.