This is a surprisingly simple recipe that works both on the stove top, and even more amazingly, with period cooking gear, and completely unbelievably with tenderfoot/webelos scouts (did I ever mention I’m a scout leader and adult trainer?).

Saute, what the heck, fry until they start to brown. Use oil in the bottom of your dutch oven. (Hint, dutch ovens can sit on a camp stove. ‘Nuff said.)
Pour in: 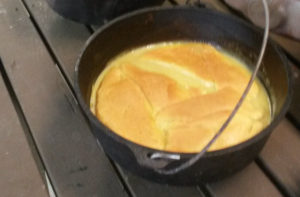 Saute, what the heck, fry until they start to brown. Remove from the heat and add 3 cutup chicken breasts (or as they would have said in Victorian times, ‘white meat’).
Cook the meat until the until it’s more or less done. There will be a surprising amount of water coming out of the meat, and you want to get shot of it. When it’s nearly done, return the onions and carrots, add about 1 cup of chicken stock and a tablespoon of corn starch. Boil to reduce. Then put in a baking dish – or dutch oven, but I’m going to show a picture in a baking dish.

Crust
You could use the crescent rolls, but where’s the fun in that?

Mix then roll out to about 1/4 inch. Or whatever it takes to make it cover the dish. Cover the filling and bake. (400F or 225C 20 minutes, until the crust is done). This is about as close as a Yank can come to the suet dumping crust my English sister-in-law makes.