The first of our wild blackberries have come in. Not enough for a pie, but enough to make a torte. The picture below shows it just out of the oven.

Cream them together. It should resemble a coarse flour when done.

Reserve about 1/2 the mixture. Add enough cold water to the rest to make a dough (If you add too much add flour until it is smooth and not too sticky (i had to)).

Put the blackberries down the middle and add about 1/3 cup sugar.

Fold over and slit the top. Sprinkle with sugar. 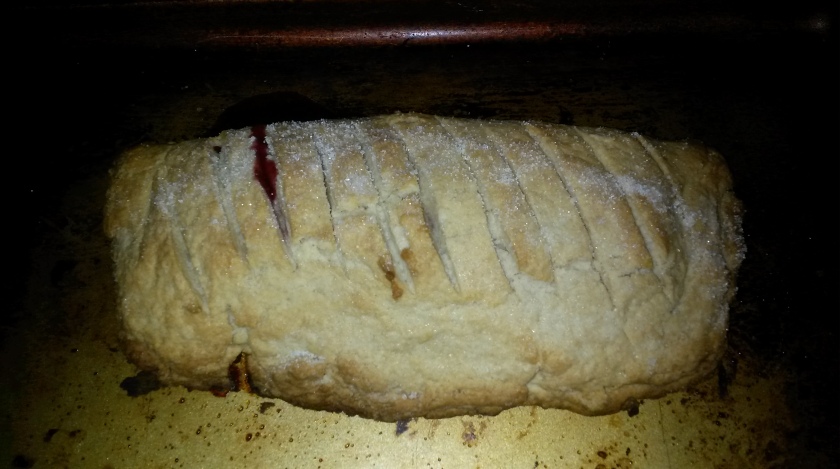 Enjoy. It’s best warm, but makes a great breakfast too.

This is fairly simple, and surprisingly easy.

You need really fresh tuna – we went to the Dekalb Farmer’s Market – and use it to make sushi.

The trick is to keep the tuna on ice and once cut up use it immediately.

Cook the rice as you normally would – with water about twice the volume of rice. When it’s finished, add the vinegar mixture and let cool.

Put spoons of rice on a plate and put a piece of the tuna on each.

Serve with soy sauce (the lighter sushi soy sauce is better), wasabi and Saki.  (We warmed ours in a gravy boat – after searching the house for our saki set.)

Kim-chee was good with it.

We also made miso soup. Cut up 1/2 onion thinly and saute then add 2-3 cups of water. Once it’s boiled add 2 tablespoons of miso paste. Stir to dissolve.

Having to revert to batchelor fare for an evening – fixing up from felonious damage and interviewing for a new alarm system – I had a chance to try a combination that is decidedly male oriented.

4 pieces pounded steak. Fry with the bacon until 1/2 done, then turn over. Add two drops of Mayan hot sauce (green, smoked habanero peppers) to each piece. Turn over and finish. 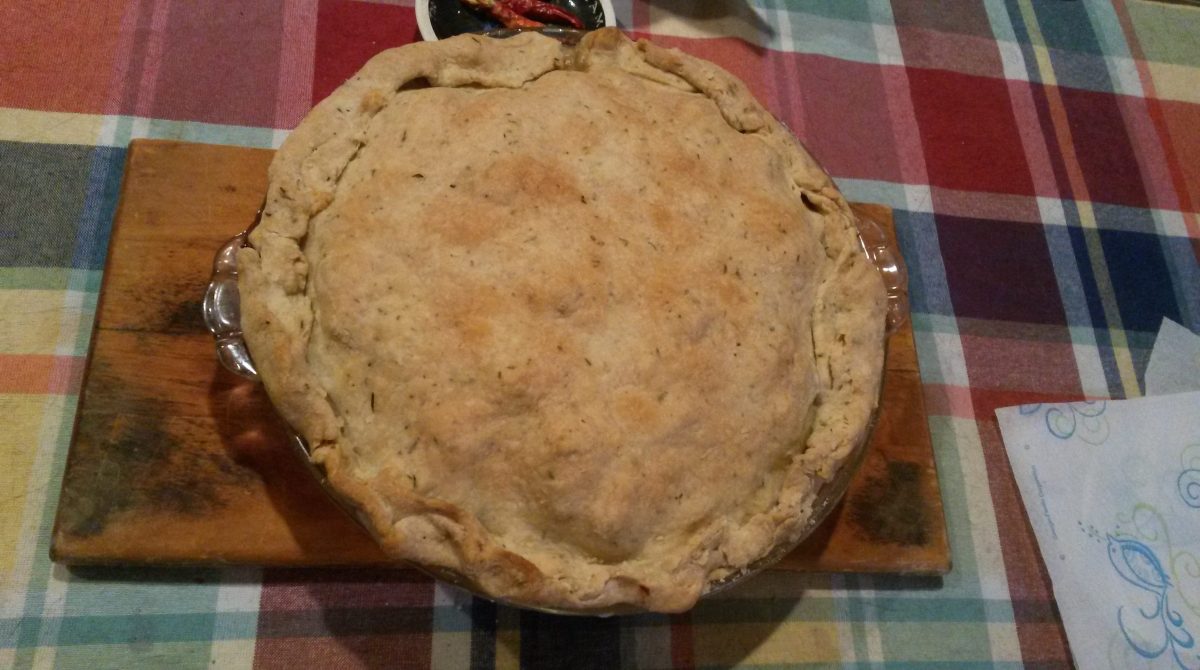 Meat pies are a traditional way to finish up with leftovers. Leftovers such as turkey.

Step 1) (Day before) boil the bones and less desirable parts of meat. (back & wings). I break it up and cover it with water. Then I boil for 4-5 hours until the fluid is dark and slightly viscous. Doesn’t that sound delightful? That’s the collagen dissolving to give the stock body.

Step 2) Filling. Precook by boiling two or three potatoes. Do it with the skin on. I’ll also cut up three or four carrots and add them to the mixture. Once they are cooked, drain and let cool (you can overlap this step with making the rest of the filling).

In a deep frying pan saute (tablespoon olive oil, tablespoon +- butter) two onions and 5-6 stalks of celery. Cut up the turkey while these are cooking. Add about 1 1/2 cups of the cooled stock to the frying pan and start the reduction process. Put the turkey and carrots (if they’re done) in the frying pan while you’re reducing. Reduce the stock by about 1/2.

Step 3) Crust. 2 cups flour, 1 stick margarine, teaspoon salt, teaspoon sage, teaspoon thyme leaves (I suppose you could used “mixed spice” in the UK). Cut the margarine into the flour mix. Then when you’re ready to roll it out mix in about 1/3 cup cold water. I add the water in smaller amounts as it’s easy to add more and dashed hard to remove it. Divide into 2/3 and 1/3.  Roll the 2/3 out and line a 9 inch glass pie dish.

Step 4) Assembly.  De-skin and cut up 1/2 the potatoes and place on the bottom crust. Add the rest of the filling from the frying pan. Then skin and put the remaining potatoes on top. Roll out the remaining crust and cover/seal with the lower one.

Bake at 375 F (210 C – slightly hotter than moderate) for about an hour. Since fluids may leak from the pie, it is a good idea to put the pan on a baking sheet with sides to catch the liquid before it messes up the oven.

The unseasonably warm fall, and the extreme drought haven’t dampened this year’s persimmon crop. Next year?

The squirrels, deer, and raccoons love them, but they ripen slowly enough that you can get more than enough for yourself.

The easiest way to prepare pulp is to mash cleaned persimmons with about a cup of sugar. Then add about a cup of milk and stir. Filter the mix through a strainer and voila you have persimmon pulp already dissolved for baking.

I use it much the way I’d use banana’s to make banana bread.

Persimmon pulp as prepared above.

Mix together. Add some flour if it’s too soupy and bake in a greased pan and a moderate (350 F 200C) oven until done. I usually make muffins. It’s also good with walnuts added to the mixture.

It’s 15C, windy and raining, horizontally. Not a great day for exploring mountains. Sounds like a pub is in order.

Pubs are the great British social institution. Dogs and children are welcome, though you do have to smoke in the garden. (I find this a great improvement, but others feel it is an overbearing aspect of the nanny state.) The best are local, almost community centres, that feel like one big family room. The worst are commercial and somewhat impersonal. None are as awful as an American bar. They’re more than just a dispensary for alcoholic beverages. No self-respecting village is without at least one pub.

Originally they were inns and stopping points for the masses. Back before trains when nearly everyone walked, it took more than a few hours to go from one end of the island to the other.  Once King Henry destroyed the Abbeys and Monasteries that housed travellers, public houses evolved to fill that role. While some still do, most pubs now don’t have overnight rooms. You’ll also read about licensing rules and pubs closing at strange hours. These were introduced to help win ‘the war to end all wars.’ The first one of those wars, a hundred years ago. One of the best things labour ever did was to revoke the rules. Now pubs are open when there’s a market for their services. (which means in the country, don’t count on them being open out of hours). By the way, the drinking age is 18.

Pubs come in basically three flavours: free house, brewer associated, and chain. Chain pubs are franchises like McDonalds, reasonable places, but nothing super special. Brewer associated will have a brewer’s name over the door. They get a deal from or may be owned by a brewery. In Berkshire around Reading a fair number of pubs used to have ‘Courage’ over the door which was a nice touch. Free houses are owned outright by the publicans and serve whatever beers they want. Free houses are usually the best, the most idiosyncratic, and typically British you will find. I aim for them, and so should you.

Ordering: Typically you walk up to the bar and wait your turn. There will always be some ‘locals’ i.e. people who haunt the pub as their almost primary residence. You may have to wait a bit to be noticed. Be polite. They will pointedly ignore a ‘loud Yank.’ Beer comes in pints and half pints. Ask for what’s the best bitter and you won’t be disappointed. American beer is lager. A typical ‘lady’s drink’ is lager and lime. You cannot get that in the USA, so even if you’re a bloke, give it a try. Cider is alcoholic. You can get a variety of soft-drinks for the children. The fruit squashes are very sweet. You also would order food here. It’s good manners to know what you’re ordering before you go to the bar. After all other people are waiting for their drinks.

Pub Food:  The French believe the British can’t cook. They also believe chicken is suitable for vegetarians. At least they’ve got something right. The thing about the British and the English in particular is they won’t complain. Some restaurants take advantage of this to serve awful food. The good ones won’t. The British also became accustomed to pretty bloody awful food during an unfortunate event in the middle of the 20th century. And they never were fond of snails – or frogs.

Good pub food can hold its head up with respect to any cuisine in the world. Things to try are: fish and chips, Sausage and chips, and meat pies with or without chips. I’d skip a ploughman’s. They tend to be overpriced. You may be offered ‘mushy peas.’ They are an acquired taste, but you should try them at least once. Never mind that they look like something the cat regurgitated. You may get a chance to have ‘black pudding.’ Take it.

Pizza has made it to the UK. It’s served as pizzas. Each typically the size of a plate and for one person.

Digestive biscuits are a delight. The base biscuit is similar to graham cracker, and you can (should) get them covered in chocolate. Ginger nuts are another biscuit worth tasting. American children often subsist on digestives when visiting the UK, since everything tastes a little different.

Bacon is different. It has meat in it. Lots of meat. Enjoy it while you can.

Sausage. My in-laws wonder why my wife and I binge on this when we’re here. Especially why we have the inexpensive plain sausages. It’s a unique and addictive flavour. One you can’t get back in the good ol’ USA.

Baked Beans. I only mention this because some people are in for a surprise. I wouldn’t bother with them in the UK. No where near as good as in the USA.

Fruits and Veggies. There’s a huge variety here now. This may change with Brexit. With apples especially, look for varieties that aren’t found in North America. Strawberries are also much nicer than you can get at home.

Cheese. The UK has its own varieties and they are excellent. Try Leicester, Cheshire, Wensleydale, Stilton, and mature (local) Cheddar. The orange brick cheese in the US will pale in comparison.

June and the wild blackberries are just turning ripe. It’s the fruit that green when it’s red. They’re best picked and used the same day, free from the weedy prickly brush.

Here’s a good recipe for a crumble:
You’ll need about 1 cup ripe blackberries and an apple, peeled, cored, and sliced.

Use the mixer to thoroughly blend into a crumbly uniform state. It is a little more crumbly than pie crust mixtures and a lot sweeter. 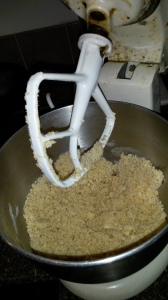 Wash about 1 cup of blackberries. I use a basin of cold water, twice, to remove bits of leaves and other things that tend to accompany wild fruit. 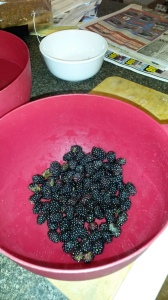 Place 2/3 of the mixture in a 9×9 baking dish, put the blackberries on top. Peel, core and section a cooking apple (Granny Smith in this case) and place over the blackberries.

Cover with the rest of the mixture and bake at 350F (200C) until the fruit is done and the crust browned. About 1/2 hour.