A 13.5 mile, 22 km walk through one of the most beautiful beaches/wild spots in the UK. It combines beaches with hills and heather in a unique walk. This is a fairly strenuous walk, at least when the temperatures reach 28 (90ish). There’s a decent amount of climbing, but no truly long epic climbs (the total climb, about 2400 feet or 740 metres, is most of the way up Snowdon). 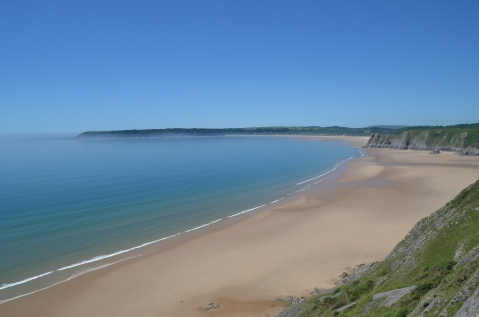 The Gower is about a 2 hour drive from Bristol and an hour from Cardiff. We started about 9 in the morning to miss the rush-hour traffic, stopped at a bakery on the way, and ate our lunch (Pasty’s and bread-pudding) at the National trust car park (3.50 for all day, Oxwich bay is 2.00). The picture above shows the view from near the top. The tide was out so we climbed down and around the Great Tor. The day was exceedingly clear, so sunscreen would have been a good idea. Hindsight is 20/20. The UV in the UK can be surprisingly strong, even stronger than in the American South.

After that we climbed up onto the Gower path which follows the spine of the peninsula. There’s some free parking where the path crosses the main road.

This shows our progress. We’re parked at the top of the cliffs in the centre left. The dim blue line at the horizon is Devon.

We ran into the first of three Duke of Edinborough crews on this hill. They (the program) seriously need to look at lighter weight pack gear. One of the girl’s packs was forty pounds or so for a short trip. Hers was on the light side. I gave them some Philmont advice (It’s not a race and “Hydrate or die!”) for hiking in the heat.  My brother-in-law’s dogs found their own way to deal with the heat. 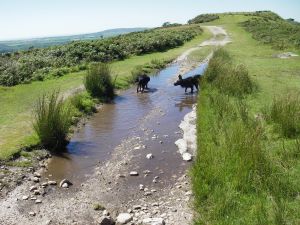 Then we climbed down to Oxwich. We refilled our water bottles at a tap in the campsite – which they may not approve of, but what they don’t know won’t hurt them. (It’s a lovely site, but does not take pets). We also stopped at the store for a choc-ice, which was well-received.

The tide was now in, which the dogs enjoyed. It also meant we had a digression on the way back. Unless we wanted to swim. (We considered it.)

This is an example of a large blue jellyfish that was washed up on shore. There were at least three other species in the water. Most of them don’t sting.

Three cliffs bay with the tide in.

Pennard Castle. It’s in the middle of a golf course, so visit with caution (and keep an ear out for ‘fore’). 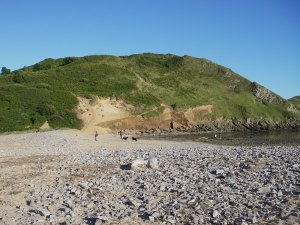 This last picture shows one of the sandy climbs. Climbing a sandy bluff is much harder work than climbing a stoney path.